The World Needs Nuclear Power, And We Shouldn’t Be Afraid Of It 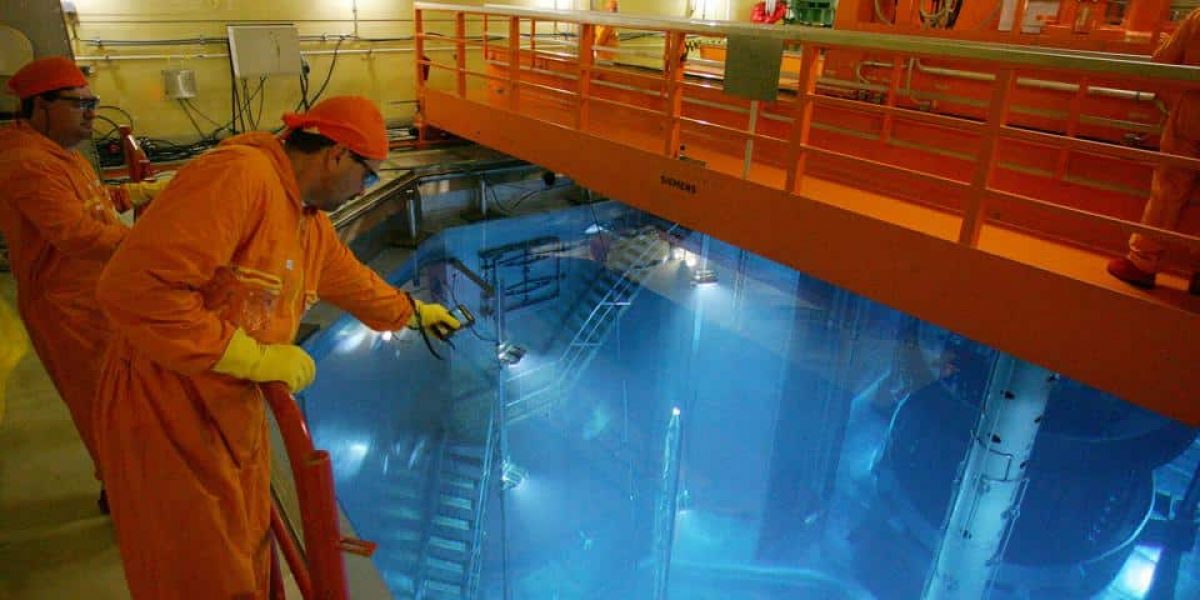 For thousands upon thousands of years, humans have been harnessing the power of nature to provide energy to push our civilization forward. By leveraging fire, we gained the ability to cook food, provide warmth and shelter, and to protect us from predators. Later on, we tamed a variety of animals, using their labor to perform tasks that would be too strenuous or inefficient for humans. Eventually, natural power sources, like the wind, was harnessed through windmills to turn millstones, grinding grain without any human input at all.

An enormous transformation occurred when we began using natural sources — windmills, steam-generating combustion processes, even flowing water — to turn turbines, generating power and providing electricity. Today, the world’s energy needs are still dominantly met through these same processes, with non-renewable fossil fuels like coal, oil, and gas providing the dominant fraction of Earth’s energy uses. We’re powering a space age civilization with the same fossil fuels that emerged during the iron age. Now, more than ever, the world needs nuclear power, and yet fear, rather than facts, governs our policies. Here’s the science of why we should embrace it.

The way a conventional, chemical-based power plant works is simple and straightforward. A fuel source of some variety is burned, releasing energy, which heats up and boils water, generating steam. That steam turns a turbine, which generates electricity, used to provide power for whatever purposes are in demand downstream.

The big problem we have, whether we admit it to ourselves or not, is that this way of generating large amounts of energy has created enormous environmental problems. While the impact of extracting these raw materials in such enormous quantities is no doubt significant, the end products of combusting these fuel sources has fundamentally and significantly changed the chemical composition of Earth’s atmosphere and oceans, leading to global warming, ocean acidification, and other climate-related effects.

The evidence that this has occurred is overwhelming, and it’s a problem that we continue to exacerbate with each passing day on Earth. As more hydrocarbon-based fossil fuels undergo combustion, they increase the concentration of carbon dioxide (CO2) in Earth’s atmosphere, which has risen from pre-industrial levels of about 270 parts-per-million to modern levels of around 410 parts-per-million: a little more than a 50% increase in less than 300 years.

This carbon dioxide increase also extends to the ocean, where carbon dioxide combines with water to create carbonic acid, changing the pH (a measure of acidity) of our oceans on a global scale.

But the most pressing problem is the global warming that has ensued from this additional amount of carbon dioxide. Our global average temperature has risen by 0.98 °C (1.76 °F) since we began accurately measuring it back in 1880, and that rise has accelerated, having increased by 0.18 °C (0.32 °F) per decade over the past 39 years.

Although many different approaches have been proposed to address this problem, it’s clear that any sustainable, long-term solution will include one important component: a transition to energy sources that don’t result in additional carbon dioxide emissions. While most of the ideas put forth — such as the hypothetical Green New Deal — focus on renewable energy sources like solar and wind power, there’s another option that we should seriously reconsider: nuclear fission power.

Yes, it’s true that fission power plants that cut corners could lead to radioactivity-related disasters, such as what infamously happened at Chernobyl in 1986. Meltdown is a risk, occurring at Three Mile Island in 1979. And a poorly contained reactor on a fault line could result in radioactive waste products contaminating the nearby environment due to a natural disaster, such as what occurred at Fukushima in 2011. But even despite these occurrences, nuclear power remains safer, on the whole, than any other large-scale power source in use over all of human history.

The first nuclear reactors to be used for large-scale power generation came online in the mid-1950s, and in that time, there have been a total of over 17,000 reactor-years (where one nuclear reactor operating for a year equals one reactor-year) spanning 33 countries. The three aforementioned incidents are the only adverse ones to be documented in all that time. And yet, when people think of nuclear power, they commonly think of these disasters — as well as the danger of nuclear war, the hazards of radioactive waste, and the destructive power of the atomic bomb — rather than the safe, efficient, and green energy source that nuclear power actually is.

Thankfully, the science behind nuclear power is actually simple, and helps us understand why we shouldn’t fear it the same way we fear nuclear bombs or nuclear war. Instead, there’s a well-understood process that goes on inside the atom, and can generate enormous quantities of power, enough to power our global energy needs for centuries, without the polluting side-effects of fossil fuels.

The physics behind nuclear power. In conventional (chemical-based) fuels, reactions occur between the electron configurations of various atoms, releasing up to ~0.0001% of the fuel’s mass as energy. In nuclear-based reactions, it’s the atomic nuclei themselves that are split, releasing approximately ~1000 times as much energy for the same amount of fuel. In particular, fissionable material (like uranium-235) only needs one simple ingredient — a neutron for the nucleus to absorb — to trigger a fission reaction.

Although other fuels can be used, the good news about nuclear power is that it’s self-sustaining: each U-235 nucleus that absorbs a neutron in turn emits three new neutrons when it splits apart, releasing energy and sustaining the reaction. So long as enough neutrons continue to interact with fissile material, the reaction will occur. This releases heat, which is used to boil water, generating steam, and turning a turbine, the same as a chemical-based reactor. Only, with nuclear, there’s no carbon dioxide waste produced.

Nuclear’s energy output is entirely controllable. One of the big concerns raised with renewable sources of energy like wind and solar are that they’re not controllable. If it’s not windy, you don’t generate wind power; if it’s not sunny (or if it’s night), your solar panels’ output drops tremendously. But the rate of nuclear output can be controlled in a straightforward manner, simply by controlling three factors: control rods, temperature, and a medium (usually water).

Remember what causes a nuclear reaction: the availability of neutrons for the fissile material to absorb. If you put more (or fewer) control rods in, you absorb more (or fewer) of the available neutrons, changing how much interacts with the fissile material. If you increase the temperature, you increase the rate of the reaction; if you decrease it, the reaction rate drops. And the presence of a medium, such as water, can also act as a neutron absorber, but that comes at a cost: you wind up with tritiated water, which itself is radioactive for a period of a few decades.

Still, this is an enormous win: we can generate more or less power as needed, up to the plant’s maximum safe capacity.

That said, there will be nuclear waste produced. Some of it will be useful for repurposing, like the plutonium used in thermoelectric heating and energy generation for deep space missions, while other material (like tritiated water) will need to be stored and managed. According to the World Nuclear Association:

Although we still have to overcome the “not in my backyard” (NIMBY) mentality when it comes to nuclear, this is essentially a scientifically solved problem.

We can fully transition to nuclear in under 20 years. Building a new, country-wide (or global) set of reactors to power the world will require a sustained investment. New power plants, reactors, cooling towers, etc., will all need to be constructed. Sufficient quantities of nuclear fuel will need to be mined, extracted, and appropriately refined. Supply chains will need to be constructed, and waste management will be an ongoing need to address. Above and beyond the existing infrastructure that we have today, it will require an enormous and sustained investment of resources.

But the payoff will come. While humanity has, to put it lightly, done a dismal job of addressing the climate crisis up until this point, that can all change. If we can simultaneously replace:

We can eliminate more than 80% of our fossil fuel uses, including practically all of the non-sustainable ones. We can transform the world for a long-term payoff with a short but significant up-front investment.

The uncomfortable truth is this: we are a space-age civilization that has chosen to eschew technological advances in energy generation because of fear and inertia. We are powering the 21st century with 18th century technology, which has had disastrous effects on our environment that we have ignored for far too long. While there are many possible ways forward to address this problem, nuclear power has the proven track record of success necessary and the flexibility to be an integral, and potentially the primary, resource in humanity’s arsenal in the fight against climate change.

For many years, we have let fear, rather than facts, control the narrative over nuclear power. While the conventional story around nuclear power focuses on the few disasters that have occurred, nuclear’s track record tells a different story: one of unparalleled safety, successful waste management, and abundant, affordable, green energy. The world needs nuclear power now more than ever. If we can overcome our entrenched biases against it, we just might solve one of the biggest problems facing our world for generations to come.

The World Needs Nuclear Power, And We Shouldn’t Be Afraid Of It

What Is Nuclear Energy?